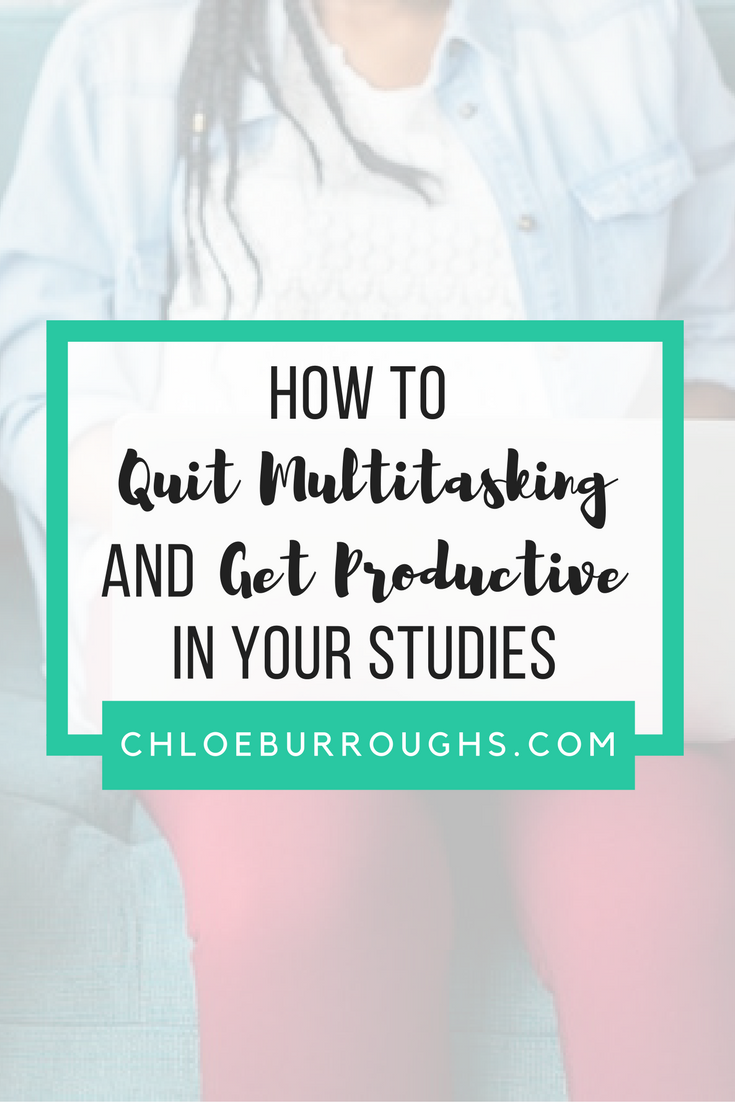 Multitasking is often praised as a desirable skill we should all develop. Job descriptions often list multitasking, or ‘the ability to juggle multiple tasks at once’, as essential skills.

Women are often praised for being good multitaskers and people often boast of being great at multitasking – but this may not be true.

It’s a myth that multitasking helps you achieve more in less time.

Some examples of multitasking are okay, such as ironing while watching television, or cooking dinner while talking on the phone. These tasks have a low cognitive load so it doesn’t take that much brain power to focus on both tasks.

However, work and study tasks have a much higher cognitive load so attempting to multitask with these tasks is an ineffective use of your time.

You can paint your nails and follow the storyline of a movie; but it would take you much longer to write an essay if you were also trying to watch television.

High performance coach, Todd Herman, explains why multitasking is bad for your productivity with the idea of ‘context switching’: the fact that we lose time if we try to work on two tasks at once.

When your brain has to switch between two or more tasks, it takes time for it to reacquaint itself with each task – and that time is lost forever.

For example, let’s say you’re working on an essay and then you notice an email has come in from your tutor. You check this email and read that your tutorial next week is moving to a different day. So then you check your calendar to make sure you can make it before going back to working on your essay.

Now this might not seem like a big deal because it only took two minutes, but it will take time for your brain to get back into the flow of essay writing. You’ll probably try to finish off your sentence and realise you can’t so you decide to read back a bit to try to remember what this section was about. You might have even lost your train of thought so waste time trying to remember what you were going to say next.

This lost time could have been prevented if you had closed your emails down so you weren’t tempted to switch contexts.

Todd Herman explains that, if you work on two tasks at once, 20% of that time is lost due to context switching. Time that could either be spent getting more study tasks done or relaxing because you finished studying earlier.

This concept explains why we sometimes feel like we’re not getting anything done. It’s easy to spend time ‘just checking’ your emails or social media, but this distraction-filled way of working will not help you get shit done.

If you’re studying while working or raising a family (or both!), then you may only have an hour or two a day for studying. When your study time is precious, it’s even more important to guard it and make it as efficient as possible.

So I’m going to share with you 4 ways you can bust this myth and improve your productivity.

1. Remove distractions before you study

If you want effective study sessions, you need to remove distractions and any chance of interruptions. So don’t study with the television on because you’ll be tempted to follow along and pay attention to that instead of your essay. This means closing your emails too and doing whatever you need to remove your phone as a distraction. You could put it on silent, turn off notifications or move it away from you.

Try to think of it like being on a diet. If you were trying to eat healthily you’d remove junk food from the house so you’re not tempted. So, before you start studying, remove anything that could distract you and cause context switching.

2. Use the Pomodoro Technique

I explain more about the Pomodoro Technique in this blog post.

But the basic principle is to split your studying into intervals with breaks in between. So you pick one study task and work on it with 100% focus for 25 minutes. You’re not allowed to do anything but that one task – no checking emails or Facebook, no Googling something non-study related. Once the 25 minutes are up you can take a five-minute break.

This is a great overall productivity technique as it allows you to focus for longer and trains you not to give into distractions or procrastination.

3. Work on one task at a time instead of multitasking

Be intentional with your choice of study task. Start and finish one task before starting another. For example, finish your notes for a chapter before deciding to email your tutor with a question about your next essay.

It’s normal for random thoughts and tasks to pop into your head when you’re studying. And it’s normal to stop studying for a minute to act on that thought or task because you don’t want to forget it.

But there’s another way that doesn’t involve incurring switching costs.

If a thought or task pops into your head while you’re studying, take a second to note it down on a sticky note next to you (or use the study planner in the productivity bundle freebie for this post). Then get back on with your studying.

This method allows you to record the task then jump straight back into studying so you get the most value out of your study time.

RECAP! You should now know... 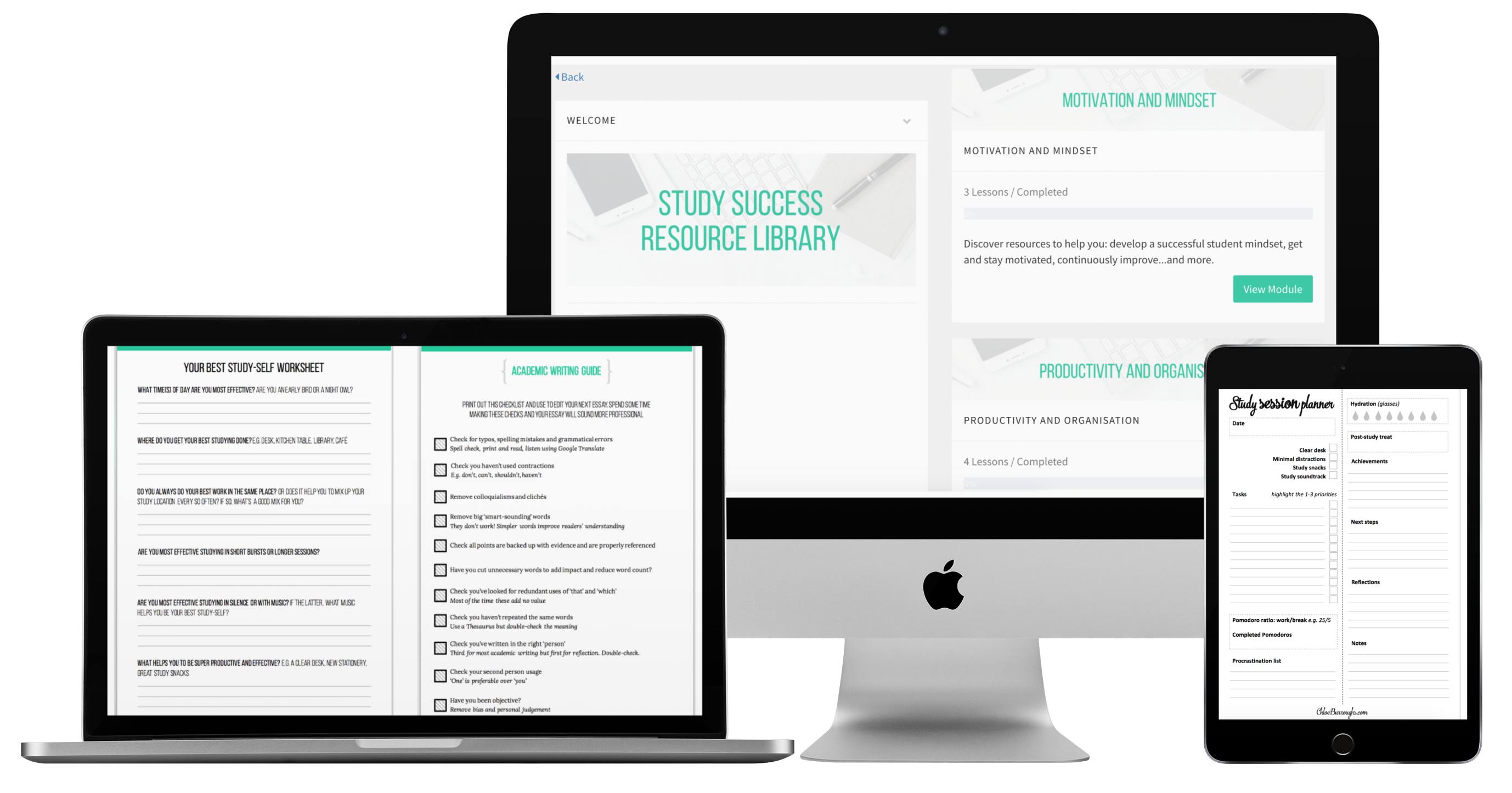